Book Review - Under the Wave at Waimea; Paul Theroux 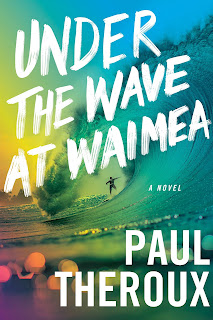 TITLE/AUTHOR: Under the Wave at Waimea; Paul Theroux

ONE SENTENCE SUMMARY:  The life and times of a once revered surfer dude, now an aging has-been forced to deal with his new reality.

Joe Sharkey,  A.K.A."The Shark"  for years held celebrity status when it came to mastering the big waves on the northern shores of Oahu.  It was how he spent his life of privilege, living off an inheritance and endorsements.  Now at 62, although he can't compete with the younger surfer-dudes who don't even recognize him.  Sharkey's not ready to give up life in the fast lane for a rocking chair just yet.  He has a 38 year-old British girlfriend, Olive,  that helps him to forget his age and the old timers on the island still look up to him. One night, after having a few too many drinks at a local bar, Sharkey hits a homeless man on a bike and although he manages to avoid prosecution, he life begins to go downhill.

I was looking for a story that took place in Hawaii and this one seemed appealing.  I liked the idea that the protagonist was an older guy dealing with his new normal and, While I enjoyed the small town feel and overall setting this novel didn't work well for me. Even though this was not a complicated story, it was one that tested my patience at times as the author chose to rehash the previous 50 years of "The Sharks" life.  I dislike the constant internal ramblings of the rather unlikeable (obnoxious) protagonist. The novel was just over 400 pages and I admit to skimming certain parts which were not holding my interest.  I found the overall storyline disappointing.

RATING:  3/5
ARC sent to me in exchange for my unbiased review courtesy of Amazon Vine program, Houghton, Mifflin, Harcourt and Edelweiss.
Posted by (Diane) Bibliophile By the Sea at 12:25 PM