Book Review - non-fiction for children - The Story of Joe Biden: A Biography for New Readers; Frank Berrios and The Story of Climate Change: A First Book About How We Can Help Save the Planet; Catherine Barr & Steve Williams 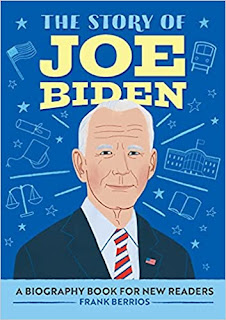 What a well-written, beautifully illustrated and complete biography for children about President Biden.  The book begins with his childhood in Scranton, PA growing up in a working class family, his stuttering challenges in school and how he lost an uncle in WWII and shows his family tree as well.  The bio then moves on to him joining the Democratic Party, being elected Senator and setting his sights on the White House.  His VP campaign and more recently his race for 46th President of the US.

One thing that I really liked was that the book asks questions that encourage children to think about their future: Asking about favorite subjects and what type of school they might like to go to, who they admire, are they nervous about trying new things, what makes them work hard to achieve their goals and several more questions like how they would go about trying to make the world a better place.

At the end there is a multiple choice quiz about Who is Joe Biden?

I was also impressed that there is a series of biographies about others who have dared to dream and become famous in their own right like: George Washington, Abraham Lincoln, Alexander Hamilton, Barack Obama, Martin Luther King Jr. Frida Kahlo, Harriet Tubman, Helen Keller, Jame Goodall, Marie Curie, and Albert Einstein. 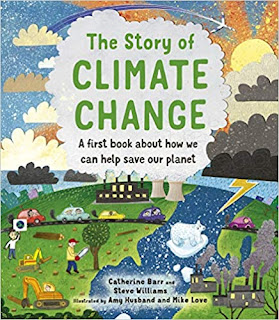 The Story of Climate Change: A First Book about how we can help save our planet.
Catherine Barr and Steve Williams (Illustrations by Amy Husband and Mike Love)
Frances Lincoln Children's Books - 2021

A perfect blend of science and history the story begins billions of years ago with the Earth's first atmosphere, a mix of swirling poisonous gases. The story moves on to how clouds are formed, how life in the oceans began, how plants started to flourish and how mammals and humans evolved.   The book then moves on to how the climate cycles have changed over the years and what climate change means for our planet as the temperatures rise, the glaciers melt, hurricanes and floods become more frequent.  Children will learn about the impact on habitats causing animals and humans to migrate to safer areas where growing and finding food may result in a better chance of success. It also speaks to climate changes impact on forests, oceans, pollution in the air we breathe and the dangers of fossil fuels as well as an introduction to green energy.  The book concludes with a 2-page glossary of pertinent terms. I thought the book was very well done and the illustrations were great as well as to make for lively discussion.

A great book and topic for parents to discuss with children or for teachers to discuss in their classrooms. I was impressed that this is a series book with other interesting topics like space, inventions etc.

Targeted for children in Grades 2 thru 5. Both of the above books would make nice additions to personal collections or library shelves. 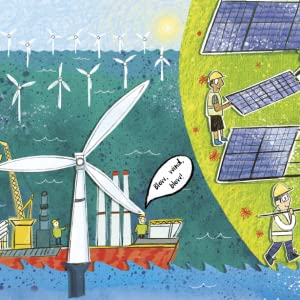 Both of these books were sent to me for my unbiased reviews through the Amazon Vine program.
Posted by (Diane) Bibliophile By the Sea at 9:38 AM