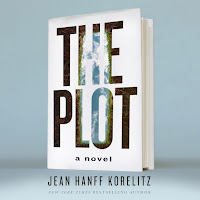 ONE SENTENCE SUMMARY:  A washed-up author finds an easy way to get a book published - steal the "plot."

BRIEF REVIEW:   Jacob Finch Bonner once a somewhat respectable author, hasn't written anything in years. His life is moving in the wrong direction and he is now teaching in a MFA program at the not to popular Ripley College in VT.  It is a college with a student population that is rapidly dwindling.  When Jacob learns that one of his former students has died he sees an opportunity for quick success. The former, now decreased student, Evan Parker was an arrogant obnoxious sort who couldn't resist bragging about what he called a never-fail "plot." Evan had shared the storyline with Jacob and it appears that it has never been published. Jacob can't resist the opportunity to pass the Evan's work off as his own and is sure to bring him success.
Three years laters later The Crib has sold 2 million copies in less than a year.  Things looking up for Jacob, he even meets a young woman on the book tour circuit that he ends up marrying. Life is good, he has money, success and an international bestseller. But, suddenly it appears, the deceit is about to catch up with him.  Emails and tweets from someone calling themself "Talented Tom" letting Jacob know that they know he stole the storyline start to arrive. The frequency speeds up and even reaches the publisher who calls him in to explain.   Jake, desperate to put and end to this and avoid controversy decides to begin his own investigation into Evan Parker and where he got the idea for the storyline.
The Plot, had an intriguing premise which I loved listening to. The audio was read by Kirby Heyborne who did a great job.  I did have mixed feelings about this one as it seemed to take forever for this one to get going. The first third of the book was slow but, then things really took off in the right direction and the story gets intriguing. At this point it was hard to put this one down.  I thought it was pretty easy to guess who was behind the emails and tweet taunts but, that was okay as the way the story ended was quite satisfying. Overall. not perfect but, I'm quite happy I had an opportunity to listen to this one.  The author had written another thriller that I read called, You Should Have Known, which inspired a recent miniseries called The Undoing starring Nicole Kidman and Hugh Grant - both book and series were quite good.
RATING:  4/5
Posted by (Diane) Bibliophile By the Sea at 7:45 PM