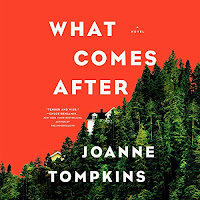 TITLE/AUTHOR:  What Comes After; JoAnne Tompkins

ONE SENTENCE SUMMARY:  A dark, sometimes gritty story with lessons about loss and redemption.

BRIEF REVIEW:   In the small coastal community of Port Furlong, Washington. Two high school boys are dead. Daniel never returns home from football practice and eight days later, his friend Jonah commits suicide, leaving a note that admits he murdered his friend Daniel.  How could this happen and why? Those left behind search for answers while finding a way to cope and move forward.

Isaac is Daniel's father and a teacher in the high school, he now lives alone with his aged dog.  Lorrie is Jonah's mother, she is a widow who works in a low paying job while raising a younger daughter.  Evangeline, is the 16 year-old daughter of a drug addict and prostitute who was abused and abandoned and has been fending for herself.  One day after the boys have died she shows up at Isaac's door filthy and noticeably pregnant and it appears she may have a connection to the boys.

The novel is well written,  perhaps overly long, and told from alternating POVs. The story unfolds in such a way that the reader is constantly trying to understand how and why these tragedies have occurred.  It is a dark, sometimes depressing debut novel and most definitely a character-driven one. I found Evangeline to be a sympathetic and understandably hyper-vigilant young woman who had major trust and self esteem issues. This is a story which I listened to in smaller doses over multiple days: people die,  others have issues, a dog dies and other people leave. The audio book was well done with multiple narrators used. Although there was mention of the Quaker faith / beliefs particularly with Isaac, the story never felt preachy.  I was happy I tried this one and, if this sounds like one you might like to try, the audio was very good.

Posted by (Diane) Bibliophile By the Sea at 1:38 PM