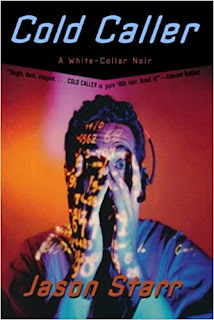 ONE SENTENCE SUMMARY:  A dark, twisted roller coaster ride and certainly a story you will not easily forget.

BRIEF REVIEW:   Bill Moss was once a VP of an ad agency but, now he works as a telemarketer at ACA, a call center in New York City.  It's a horrible company that engages in racially discriminatory practices by paying larger commissions to white employees and wrongly laying off a higher percentage of black employees to avoid paying out their commissions. Bill hates his job and feels under appreciated and has plans of quitting his job. He has convinced his weak, gullible, girlfriend Julie to move back to Seattle with him where he's convinced he can get a top level management job.  The very next day, after Julie reluctantly resigns from her high level position,  Bill gets promoted to Assistant to the President at ACA.  Of course, his promotion is built on a lie he told because, that's what Bill does but, that lie will come back to bite him. Bill lies a lot, he cheats a lot and he makes his girlfriend believe that she is paranoid and has an explosive temper at times as well.  Bill is a sociopath, Bill is delusional, Bill may be a psychopath and as the story progresses, Bill can add murderer to the list.
Bill is a character that is easy to detest but, he's like a car wreck that once you start reading about him and all of his antics and just how his warped mind works you won't be able to turn away or stop reading.
This is the author's first novel and although the writing isn't exceptional, the story is very addictive, shocking and easily readable and, it very much satisfied my warped sense of humor.  The story is dark but you will find it hard to resist chuckling or at least scratching your head in amazement at times and,  I also loved the ending as well.  I got the idea to try this one as it was mentioned in Peter Swanson's book, Eight Perfect Murders, a book that I loved.  Touted as one of the top 10 noir crime novels of all time and an international best seller,  the Kindle version is available for just $1.99, in case I've made you curious.  I'm definitely planning on checking out what else the author has out.
RATING:  4.5/5
Posted by (Diane) Bibliophile By the Sea at 2:39 PM