192 - Amen, Amen, Amen: A Memoir of a Girl Who Couldn't Stop Praying (Among Other Things); Abby Sher 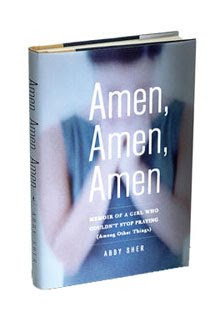 Abby Sher was a happy child from a musical family until about the age of ten. When her father and favorite aunt pass away, Abby deals with her grief and the loss by performing various rituals.  For example, kissing her fathers picture over and over again at night. Suddenly something so seemingly harmless grows into a series of elaborate rituals such as: repetitive praying, washing her hands over and over, counting her steps, and collecting sharp objects from the pavement.  Before long her prayer ritual alone grows into her spending hours reciting prayers and pleas, for she firmly believed that if she stopped other people would surely die too.

It is not until college, feeling out of control, suffering from anorexia and self-mutilation issues as well that Abby is finally diagnosed with obsessive-compulsive disorder.

My Thoughts - A touching, haunting memoir about a young woman's struggle with Obsessive Compulsive Disorder (OCD). I was surprised that the story was even funny in parts, and it did not leave me feeling depressed. If you enjoy memoirs, and aren't afraid to examine a few of your own harmless quirks as you read about Abby, then this book is RECOMMENDED.
Posted by (Diane) Bibliophile By the Sea at 8:53 PM