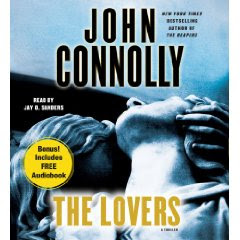 It wasn't until I finished listening to this audio book did I realize this was book #8 of the series featuring PI Charlie Parker.

For newcomers like myself, Charlie Parker is a private investigator whose license to carry a firearm has been suspended. Charlie now spends his time as a bartender in Portland, Maine. While in Maine, Charlie does some reflecting on his past; life has not been kind to him. Charlie's wife and daughter were murdered (in an earlier installment), and even earlier when Charlie was just fifteen years old, his father a NYPD officer, had committed suicide after being haunted by the fact that he had shot and killed two unarmed teenagers. As Charlie begins investigating events of the past some startling facts surface.

My Thoughts -- Although I enjoyed listening to this audio book a lot, the reader was terrific, but I did find some of the story confusing at times. If you are a fan of psychological thrillers. and stories with elements of the supernatural and ghosts from the past, you would probably enjoy this series. I would recommend starting with book #1....Every Dead Thing, as I did wish I had done. I think everything would have made perfect sense, and I would have enjoyed this story even more than I did.
Posted by (Diane) Bibliophile By the Sea at 7:07 PM