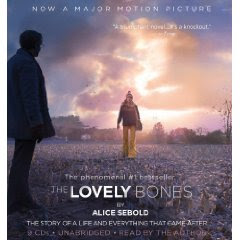 I first read The Lovely Bones the year it was released (2002), and I loved it. I recall reading it in one sitting I was so hooked. It ended up being my favorite read of 2002.  So I thought since the movie is being released this month, I wanted to read it once again before I saw the movie.  This time, I listened to the audio version, read by the author, and although I enjoyed it, I wasn't as in awe as I was the first time around. Has that ever happened to you with a reread?  For those of you who still have not read this book, it starts out like this:

" My name was Salmon, like the fish; first name Susie.  I was fourteen when I was murdered on December 6, 1973"

From heaven Susie narrates the story of her rape and murder.  She even reveals who her killer is, and she enlightens the reader as to what her heaven is like, and how it is ever changing.  From heaven Susie is constantly monitoring her family on earth as they try to cope with what has happened to Susie. Although Susie remains fourteen throughout the story in heaven, her family ages by eight years as deal with the aftermath of her murder.  Susie's father is obsessed with finding her killer and little by little he is gathering evidence on the person he suspects murdered his daughter.  The mother deals with her grief by having an affair, and her brother Buckley and sister Lindsy are also trying to understand and move on with their lives at the same time.

Still an amazing debut novel, which I enjoyed, I am suspecting that the reason I did not enjoy the audio as much as the print version was because of the author's monotone voice, which in my opinion took away from the terrific story. Despite that this book (especially the print  version) is HIGHLY RECOMMENDED.

Have you read this book? Any plans to see the movie?
Posted by (Diane) Bibliophile By the Sea at 8:35 PM