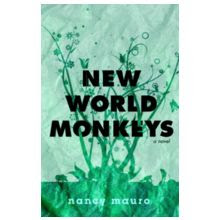 In  NEW WORLD MONKEYS, Lily and Duncan are a Manhattan couple, whose five year marriage has seen better days. Duncan is in Advertising, and working on a new campaign, and Lily is working on her dissertation. They are headed to upstate New York to a run down mansion that has been in Lily's family for years. On their drive along a darkened road, out pops a wild boar that runs smack into their car. If that isn't bad enough, the animal is not dead yet. So Lily does what Duncan won't do and take a tire iron to the creature to put an end to its suffering. They then move the boar to a ditch and continue on their way to the quaint village of Osterhagen (fictional). To the couple's surprise they find out the boar was actually the town's mascot: Sovereign the Deep Wool! The boar had a owner who isn't very happy that Sovereign is missing, and he is bent on seeking revenge. There are more offshoots to this story, but I did not think it was necessary to reveal all the details.

My Thoughts - I had some reservations about this story, but I love trying out new debut authors so I gave it a go. The story is quirky and, for me it was outright bizarre. Don't get me wrong, this author has potential; her writing style is terrific, and the characters were well developed. It is just that this novel had multiple story lines, and the characters, although well-developed were unsympathetic. Basically, it was a story that just did not work for me.

Posted by (Diane) Bibliophile By the Sea at 4:21 PM