199 - The Monster of Florence; Douglas Preston with Mario Spezi 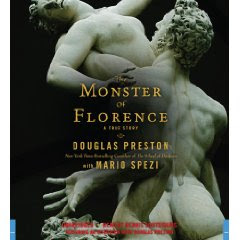 The Monster of Florence; Douglas Preston with Mario Spezi.


In 2000, American author Douglas Preston moved with his wife and two children to Italy (just outside of Florence). His plan was to write a new mystery novel.  While interviewing an Italian newspaper reporter (Mario Spezi) about the Italian judicial system, Preston learned that the house that he and his family were renting was near a murder site that was connected to a series of related murders in which the serial killer was never caught. In fact, between 1974 and 1985, eight double murders of lover's lane couple occurred. In each of the cases the female victim was badly mutilated. Fascinated by this information, Preston decided to abandon his plans for a mystery novel, and instead, he and Spezi became friends and decided to write about the elusive murderer dubbed the "Monster of Florence" instead.

The story is told in two parts: in the first half Spezi describes the murders, the suspects and the botched investigations. The cases turned cold, some of the witnesses died off after 30 years. The Italian judicial system and authorities are portrayed as down right incompetent and laughable.  In Italy, you are guilty until proven innocent. In the second half of the book, Preston tells about how he and Spezi met, and about their decision to write this book.  You learn that the Italian officials were so annoyed by Preston and Spezi's  research and investigation of these unsolved murders, that they arrested Spezi, and indited him initially as a suspect in the murders. They told Preston that he would be charged with aiding and abetting, and he was advised to leave the country. The authors vividly depict the Italian investigators, prosecutors, and corruption and mismanagement of evidence etc.

MY THOUGHTS - The Monster of Florence is a fascinating true crime story. The audio version was read by  Dennis Boutsikaris (a favorite audio book reader of mine). He had many distinct voices for the various characters, however the Italian annunciation, became a bit annoying for me after a while. For that reason, I almost wish I read the print version of this book.  If you enjoy true crime novels, and are not afraid to hear about some very graphic details of the murder and mutilations, then give this book a try. It's not perfect by any means, the killer is never caught, but despite that it is an interesting read.
Posted by (Diane) Bibliophile By the Sea at 12:31 PM