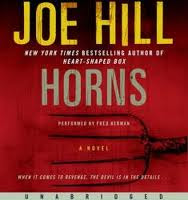 Having been quite impressed with Joe Hill's first novel, Heart-Shaped Box, I decided to try the audio version of another one of his books, Horns. This audio book was read by Fred Berman who did a very good job.

The story takes place in a small town in new Hampshire, and tells the story of Ig (Ignatius Perrish), a young man who wakes up one morning with a horrible hangover, and unable to recall anything that happened the night before. His drinking binge was sparked by the (1) year anniversary of the death of his former girlfriend, Merrin Williams.  If that isn't bad enough, after this binge, Ig notices two horns protruding from his temples.  First he thinks that he is seeing things, and it seems like if other people notice them, no one is reacting or commenting about them.

It isn't long before Ig realizes that these horns seem to serve as almost a confessional to the people he comes in contact with.  Some of the people wish to bear their souls to him,  and ask permission to act on some self-serving impulses or fantasies that they have been struggling with.  This gives Ig an idea -- maybe he can use this power and effect he is having on others to get to the bottom of, Merrins rape and murder.  A crime for which the entire community sees him as the prime suspect, but yet he's never been charged.  If he can just find out who was really responsible, he feels he will finally be able to escape the private hell he has been living.  However, when people start talking the opposite seems to occur.

The story has a cast of unlikeable characters, and typically when that happens to,  I sometimes end up disliking the book I've been reading.  With Horns, the opposite seemed to occur.  There were several things I liked about this book. I loved the way that the author depicted small town life in new Hampshire.  I loved all the twists and turns, and was enjoying the ride along the way. This book examines the evil in some people, even those we love the most. The writing was addictive and even humorous at times, but the ending left me less than thrilled.  I'm still happy I listened to this one and would love to hear your thoughts if you read it. I will definitely read another book by this author.
Posted by (Diane) Bibliophile By the Sea at 8:38 PM