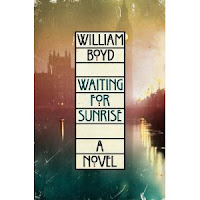 
William Boyd's latest novel,  Waiting for Sunrise, which releases next month, is unlike anything I've read in a long while.

The story begins in 1913 when a 28 year-old English actor by the name of Lysander Reif has taken all of his money and headed to Vienna.  It seems the handsome, educated man has a bit of a sexual dysfunction issue.  In Vienna, Dr. Bensimon, a highly regarded psychoanalyst, considered an expert in the field, and a former student of Freud, is the man Reif is confident can help him overcome his sexual performance issue.


While at an analysis appointment, Reif encounters, Hettie Bull a brazen woman, who bursts into the doctor's office during one of his sessions without an appointment.  The woman is an attractive British artist (sculptor), who after a second run in asks him to pose for her.  The two begin an intense affair complete with steamy imagery.  Although the affair cures him of his sexual dysfunction issue, he ends up with trouble he never imagined.

Entering into the story is a second individual, Alwyn Munro, who he also met during his analysis sessions. Munro works for the British Consulate.  When Reif is charged with rape by Hettie, it is Munro who aids in his escape from Vienna, but not without the government expecting something from him in return.  The reader, along with Reif are pulled into a world full of deception, intrigue and espionage.

The story for the most part was fast paced. The writing is well done, very descriptive, steamy and sensual, combined with a bit of mystery, WWI background, lots of intrigue and plot twists.  In honesty, it is not the type of story that I expected to enjoy, but I did, which tells me that I'll be a lot less hesitant to move outside of my comfort zone in the future.  RECOMMENDED
Posted by (Diane) Bibliophile By the Sea at 9:30 AM