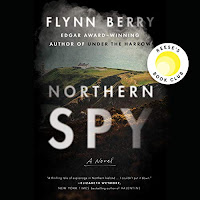 ONE SENTENCE SUMMARY:  A spy story that offers something more, geared to appeal toward readers who usually avoid reading them.

BRIEF REVIEW:  Tessa Daly is a single mother of  an infant son, she is close to her mother and her sister Marian.  Tessa lives in Belfast, Northern Ireland where the conflict between the British territory and the IRA has long been a part of life. Working as a BBC producer, one day Tessa sees video footage of a robbery with a suspect that appears to be her sister Marian, pulling a ski mask over her head. The authorities believe that Marian is part of the underground IRA.  How can this be - Tessa knows her sister so well?

When the authorities come to Tessa to question her about her sister and later the truth comes out about Marian's seven year involvement, family ties are tested especially when Marian asks for her sister's help.

I liked the way this story was written with short chapters and a plot that keeps the story moving along at a quick pace.  It's a story that gives the reader a lot to think about especially for someone like me who was pretty unfamiliar with the IRA conflict and the general political climate.  It's a story that makes you think about the choices and sacrifices that one must sometimes make for the greater good.  Tessa's character held my interest but, I found it a little hard to believe a young mother might take some of the risks she considered. I also thought that Marian's character could have been further explored. There were also a couple other characters that I would have liked to know more about like Seamus and the MI5 agent. Despite this I was happy I tried this one.

I was on the fence about this book but, once I began listening, it was hard to take a break. The audio was read by Katharine Lee McEwan whose accent seemed to made the story all the more compelling.

Thanks go to Penguin Audio for allowing me access to this audio book at no charge in exchange for my unbiased review.

Posted by (Diane) Bibliophile By the Sea at 4:58 PM