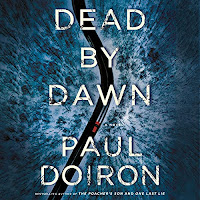 ONE SENTENCE SUMMARY:  A killer wants Maine Game Warden,  Mike Bowditch dead and soon he will be fighting to stay alive.

BRIEF REVIEW:  This story starts out in high gear with Game Warden, Mike Bowditch and his half-wolf dog Shadow, crated in his truck, driving home on a frigid winter's night when large spiked jacks-shaped objects placed randomly in his path. This causes his tires to blow out and his truck careens into the frozen Androscoggin river below.  Will man and dog survive the icy plunge?  Who set him up and is someone waiting to attack as Mike tries to escape the vehicle and save himself and the dog?

In the other storyline of what happened earlier in the day we learn that Mike was asked to revisit the death of a wealthy professor by his difficult daughter-in-law. She believes her FIL's death was not accidental (death by drowning) as it was ruled. She claims that her late FIL been duck hunting on the Androscoggin river and supposedly fell out of his boat and drowned yet when he was found he did not have his life vest on. She claims that he would never have gone on a boat without a life vest. She further suspects a survivalist who was hunting with him that day had something to do with his death.

The entire story is told over a 24 hour period and the writing is very good and engaging. I loved the 1st person POV and how the mystery played out. I also enjoyed how humor is peppered at appropriate times which was a nice touch.  This one is #12 of the Mike Bowditch, Game Warden series and unfortunately, I've only read a couple of other books in this series.  I definitely would have benefited by reading the previous installment involving the Dow family as there were references to people and events that were foreign to me.  I don't recall feeling that way with the other 2 series books I read previously.  I do now want to go back and read all of the ones I've missed - the writing is well worth it and the characters well-crafted.

Thanks go to NetGalley and Macmillan Audio for access to this audio book in exchange for my unbiased review. The audiobook was read by Henry Leyva did a very good job.

Posted by (Diane) Bibliophile By the Sea at 6:51 PM