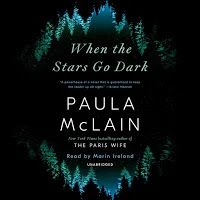 ONE SENTENCE SUMMARY:  A rather dark story that concludes with a little bit of hope.

BRIEF REVIEW:  The story begins in 1993 with Anna Hart, a missing persons detective in San Francisco who specializes in missing children. It's clear from the beginning that something tragic has happened in her life. She is leaving her home and husband and headed to Mendocino, where she had a few happier years as a child of the foster care system after her parents had abandoned her. Mendocino was her safe place.

Holed up in cabin in the woods with just basic essentials Anna learns through Will, the local sheriff, about the case of a missing girl named Cameron whose mother was a film star. A second girl goes missing around the same time and it appears something more sinister is going on. The cases remind Anna of a real life murder case from when she was a teen in the area. (References to the 1993 Petaluma, CA, case involving Polly Klaas.)

Well I was right when I suspected that this might be a dark and heavy story. It was dark and gritty, not only the missing teens cases but the whole reveal about Anna's past as well.  Slower paced and character driven, there are quite a few characters in this story. Told in the first person POV of Anna, this seemed to make the story feel more intense and personal. I liked the police procedural components and feel the author did a good job maintaining suspense. I did think the ending, after a rather lengthy story, did feel a bit rushed after a much slower start.

The audio was read by Marin Ireland who did a great job.

Thanks go to Penguin Random House Audio for allowing me access to this audiobook as well as eGalley in exchange for my unbiased review.

Posted by (Diane) Bibliophile By the Sea at 8:21 PM