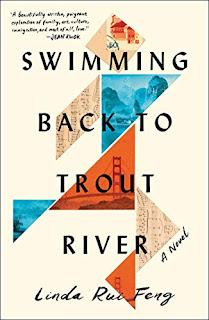 ONE SENTENCE SUMMARY:  A beautiful story of family that takes place around China's Cultural Revolution.

BRIEF REVIEW:  1986 - Ten year old Junie who was born without lower legs has been living with her loving grandparents near Trout River since the age of five. Her father Momo was an engineering student in Beijing but, in 1981 left for grad school in the US. Cassia stayed behind but,  she left for the US two years later.  Now in 1986 after Junie hasn't seen her parents in five years she receives a letter from her father telling her that he plans to come for her by the time she turns twelve.  Junie is determined to stay right where she is with her grandfather, her biggest advocate. He has even built her a prosthetic leg which has helped her to thrive.  One thing that Junie was not aware of was that her parents led separate lives in the US and each parent has failed to communicate separate pasts and tragedies which led to their estrangement. Momo is determined to reunite with Cassia so that their family can be together again.

I loved reading a little of China's history from 1960 through the Cultural Revolution under Chairman Mao. I loved that classical music and the violin played a role in the story and also reading about how superstitious the Chinese people in this story were.  Most of all, I loved Junie's special relationship with her grandfather even though Junie's story is not as in depth as the stories of Momo, Cassia and Dawn, a musician Momo had been involved with. The story was quite poignant at times and, I was not prepared for the way this story ended but, I found it satisfying and thought provoking.  If you are looking for something a little different: culture, immigration, the arts and love, I highly recommend this debut novel.  I'll definitely be looking for future books by the talented new author.

This was a combo read/listen for me. Thanks go to Simon & Schuster for allowing me access to these books: eGalley (Edelweiss) and Simon & Schuster (audio) in exchange for my unbiased review. The audiobook was read by Nancy Wu who did a great job.