Book Review - The Babysitter: My Summers with a Serial Killer; Liza Rodman and Jennifer Jordan 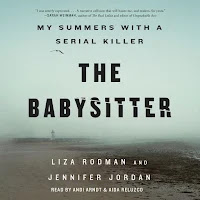 TITLE/AUTHOR: The Babysitter: My Summers with a Serial Killer; Liza Rodman and Jennifer Jordan

ONE SENTENCE SUMMARY:  Part biography and part true crime, it isn't until decades after the fact that the author realizes the nice man who babysat her and her sister as children was actually a serial killer.

BRIEF REVIEW:  Liza and her sister were lonely little girls growing up on Cape Cod in the 1960s. Their mother was not the nurturing kind. By day she worked at a Provincetown motel where they also lived and by night she danced at a local nightclub. It wasn't unusual for her to leave the girls with whomever was available when she had to work or had a date.  One of the babysitters at the time was the handsome, friendly Tony Costa who worked as a handyman and made trash runs to the dump for the motel.  Often on these runs the girls would accompany Tony who Liza recalls as kind, fun and often treated them to ice cream treats.  As it turned out Tony lived a double life during these years and in 1969 it finally comes to light that he was responsible for numerous murders and dismemberments of young women he met in the area.  He buried their bodies in the Truro woods on Cape Cod which he referred to as his "secret garden".

The story is told in alternating story lines from Liza's young, lonely and sad life with her irresponsible mother and then shifting off to Tony's troubled early years and history of drug abuse and his abusive treatment of women up until his arrest in 1969 and death in prison in 1974.  I thought it was interesting that it wasn't until decades after Tony's death that Liza learned that her babysitter early in life, was actually the same Tony Costa responsible for several gruesome murders.

The story was fascinating yet the flow of this story felt quite jarring at times for me. It was almost like two separate books.  The story is very graphic at times with gory details of the murders and other vivid details of abuse: drugs, physical, verbal and sexual abuse.  Fortunately for Liza, as she recalls, Tony seemed to feel sorry for Liza and her sister and treated them with kindness and she remembers him as more dependable than their own mother.  Once Liza learned Tony "the serial killer" was also Tony "her babysitter", she became obsessed with finding out all the details of the man she had long considered to be a nice man.

Thanks go to Atria and Edelweiss for access to the eBook. The audiobook was a free download from my library. It was read by Andi Arndt and Aida Reluzco  - both readers did a good job overall.

Posted by (Diane) Bibliophile By the Sea at 5:49 PM