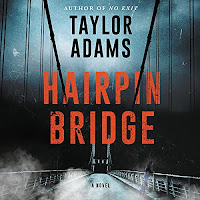 ONE SENTENCE SUMMARY:  A suspicious death, ruled as a suicide has her identical twin sister wanting to know more about her final day.

BRIEF REVIEW:  Cambry and Lena Nguyen were identical twin sisters. Although the sisters were estranged, when Lena learns that her 24 year old twin committed suicide, 60-miles outside of Missoula, Montana, three months earlier while driving cross country, Lena finds it hard to believe. Determined to find out more Lena travels from Seattle to Montana to ask questions. She learns that her dead sister attempted to make 16 calls to 911 and also tried to send a mysterious text about the cop who found her body below the now closed "Hairpin Bridge."  Lena believes the cop, Raymond Raycavic, is somehow involved and has something to hide as it appears he stopped Cambry on the very day she supposedly committed suicide by jumping from the bridge.  As Lena begins to ask questions while speaking to Raycevic, she finds that he initially seems willing to help yet something definitely seems off as well.  Was it suicide or was something more sinister at play here?

I read the author's previous book "No Exit" and enjoyed the fast pace and hair-raising moments, even though parts of that one were a little far-fetched, so I was pretty sure this would be a thrilling read for me.  This one definitely seemed darker, grittier and even gory in parts compared to "No Exit" but, I enjoyed the cat and mouse feel to the story.  Told from the third person POV, as well as from blog entries by Lena as well as excerpts from a book she is writing, we learn of Lena's time in Montana and also what happened on the final day of her twin sister's life.  This is one of those stories that isn't perfect but it certainly was one that is hard to put down once you begin.

The audiobook was a free download from my library. It was read by LuluLam and Sophie Amoss who did a good job.

Posted by (Diane) Bibliophile By the Sea at 9:31 AM