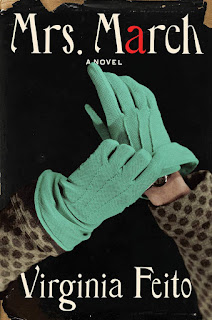 ONE SENTENCE SUMMARY:  An addictive story about one whack-a-doodle lady you will never forget; you owe it to yourself to read about Mrs March.

BRIEF REVIEW:   Mrs March is the wife of George March a successful author who has just published a successful book that everyone is talking about.  The couple lives on the upper East Side in NYC and the couple has an eight year old son named Jonathan.  The March family has a maid named Martha and Mrs March (we never learn her first name until the very last sentence in the book), is very concerned about appearances and hosting parties, mostly for her husband's benefit, she also has an exaggerated sense of self.  The highlight of her days seems to be going out daily shopping and stopping at a local pastry shop for "black olive bread and macarons."  It is on one of these daily excursions that Patricia, the "big haired red cheeked woman" who manages the shop enlightens Mrs March by asking her, "Isn't this the first time he's based a character on you?"  The problem is the main character in George's new book is a despicable woman and whore that no one wants to sleep with.

From this point on Mrs Marches paranoia and delusional thoughts begin to spiral out of control as she wonders whether the Johanna character in the new book could really be what her husband thinks about her. The more she dwells on whether she was the inspiration for his book, the worse her thoughts become. She begins suspect that her husband may be a murderer and is determined to find out if her hunches are correct. What follows is the continued unraveling of poor Mrs March. The reader gets the impression that something bad is about to be revealed or even something more sinister is yet to come but, that is the hook with this fantastic story. The reader is privy to every delusional thought and action by Mrs March including flashbacks to some rather bizarre childhood incidents.

The story appears to take place in modern days yet, it also appears that the internet and cellphones were not available so perhaps it may be the late 1970s or early 1980s. This is an example of a book that was so well-written that it did not matter that none of the characters were likable. The images created are ones that will stick with me.  It's this type of dark, dead pan character that tends to work so well for me. I'm not surprised that this has already been optioned for a screenplay as I could envision it as I read.  A must read for readers who like stories with a darker side. It's a definite page-turner but, also a story I did not want to end. This is sure to make my list of favorites for 2021.

This book releases on August 10, 2021. Thanks go to Liveright and Edelweiss for allowing me early access to this book in exchange for my unbiased review.

Just one of the hilarious quotes and examples of writing style

"She ended up purchasing lingerie at a small store downtown owned by a limping, mole-ridden woman who correctly guessed her bra size after one look at her fully clothed form.  Mrs. March liked the way the woman had pandered to her, complimenting her figure and, better yet,  maligning other clients' figures between disappointed oy veys. The women in this store gazed at her expensive clothes with perceptible yearning. She never returned to Bloomingdales."

Posted by (Diane) Bibliophile By the Sea at 2:19 PM