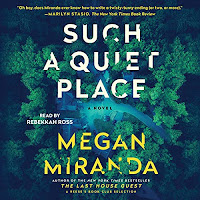 ONE SENTENCE SUMMARY:  A puzzling neighborhood murder and the release of the convicted individual puts a once peaceful neighborhood on edge.

BRIEF REVIEW:  Hollows Edge was once a peaceful, lakeside college community of just 10 homes, a homeowner's association with community pool. It was a place where neighbors were once civil toward others. Then Brandon and Fiona Truett were found dead and Ruby Fletcher, the 25 year old tenant of resident Harper Nash was convicted of their murders based on security clips and testimony of residents.  Now Ruby's conviction has been overturned after serving just 14 months and she's wrangled her way back into Harper's home, determined to find out who really killed the Truetts.

Naturally Harper, a quiet, non confrontational type, is not happy having Ruby in her home and, the neighbors, especially Charlotte, who heads the HOA is up in arms. She pressures Harper to get Ruby to move out but, Ruby's strength in is manipulating people and she's determined to find the killer.  Of course there are quite a few unlikeable characters and several residents who worked at the local college who knew the decreased resulting in several suspects to these crimes.

The story takes place over eleven days in the summer around the 4th of July.  It is a time when residents gathered and generally celebrated but that is not the case this year as people are pitted against each other and everyone seems to be pointing fingers. I loved the setting and although the story had a slow start, I found myself engaged and suspicious of a few characters - anxious to find out more. Ruby and Charlotte were easy to dislike and I wanted to shake Harper at times as well. I felt that the story lacked the thriller aspect I had hoped for and the twist at the end felt like a bit of a let-down to me.  Overall, it's a bit of a slow burn and it left me wanting more.

Thanks go to Simon & Schuster for allowing me access to this audiobook in exchange for my unbiased review. The audiobook was read by Rebekkah Ross who did an okay job.

Posted by (Diane) Bibliophile By the Sea at 5:00 PM