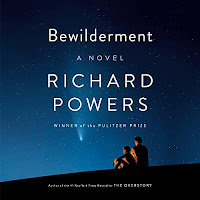 Bewilderment was powerful story about a young boy named Robin, age 9 (soon to be 10) and his father Theo, an astrobiologist, whose researches possible life on other planets.  It's also a story about their mother and wife Alys, a former environmentalist, who died in a car accident two years earlier while trying to avoid hitting an opossum.  Robin is a highly intelligent and sensitive young boy who is considered to be on the spectrum, he has also been bullied.  Robin is very intense about the world around him and is especially concerned about animal kind.  When Robin becomes enraged in school one day and lashes out, hitting another classmate in the face with a thermos, the school demands that Theo do something about his son's behavior or he will not be allowed back in school.  Not wanting to medicate Robin or label his son, Theo reaches out to a former associate of his late-wife asking him to allow Robin to participate in a neurological study to help better understand the emotional triggers which cause Robin's outbursts.  The love of this father for his son is easy to see in the way these two interact. When Theo and Robin are a twosome exploring nature, rivers and sleeping under the stars, profound discussions happen and all is well.

The story is much more complex than my simplified review above demonstrates. Yes, it's about raising a child who is wired differently.  It is also very much about science: the planets, our climate crisis at its tipping point and what is happening in American politics and the world around us. This is a fairly short book under 300 pages and 7+ hours on audio.  I thought the story was awesome but, at times it seems like the author tried to cover too much territory as well.  I enjoyed the audio but, I also wished I had a print copy of as well.  The writing is quite moving so it would have been nice to reread some parts.

Bewilderment was narrated by Edoardo Ballerini who did an excellent job. The audio download was provided to me at no change by Penguin Random House Audio in exchange for my unbiased review.

Posted by (Diane) Bibliophile By the Sea at 2:42 PM