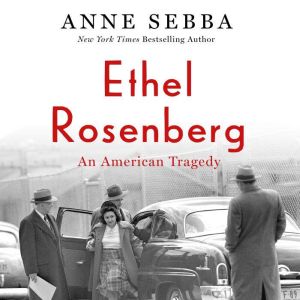 I've always enjoyed a good dose of NF, especially with a good bio or memoir, so when I saw this biography was recently released, I was intrigued.

I think most of us in the US have heard at least a little about Ethel and Julius Rosenberg. The couple who lived on the lower East Side in NYC and were convicted of conspiring to commit espionage for the Soviet Union. The couple was put to death by electrocution minutes apart on June 19, 1953, leaving two young boys who would enter the foster care system.

Ethel, a Jewish immigrant, was raised by a mother who was very cold and critical and favored her brother David. Ethel was a bright girl who graduated from school at 15 and loved music; she had dreams of a career in the opera. She landed a job with the government which she gave up when she married Julius so that he could work for the government in New York. She wanted to be a good wife and mother, but at the age of 37 she was put to death leaving her sons ages 6 and 10 orphans.

All of this happened during the Cold War and both husband and wife believed in communism as did many immigrants at that time. They, along with others,  saw communism as a way to lift immigrants who came to US in search of a better life out of poverty.  The US in the 1950's was the age of McCarthy-ism and there was rampant political paranoia.  Ethel's own brother David perjured himself and later admitted he lied when he gave testimony. There was jealousy among the families and David's false testimony against his sister Ethel was an effort to protect his own wife.  There was no concrete evidence that Ethel was guilty but, it was proven that her husband Julius had been recruited and was a spy. Despite the pressure put on Ethel to incriminate Julius, she refused to do.  Most believed that at least Ethel Rosenberg was innocent but, the government was determined to send a frightening message by putting her to death as well.

This book was extensively researched and was an eye-opener for sure; it gives the reader a lot to think about. At times it made me mad that something like this could have happened here in the United States, especially in the manner it all appeared to go down.

This audio download was provided by Macmillan Audio and NetGalley in exchange for my unbiased review. The narrator, Orlagh Cassidy did a very good job.

Posted by (Diane) Bibliophile By the Sea at 7:31 AM