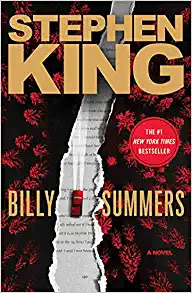 Who is Billy Summers? At 44, Billy has seen a lot, a decorated war vet who served in Iraq, a professional sniper and a calculated killer with one last hit to accomplish before that part of his life is over.  While waiting for just the right moment to make that final hit, he uses not only multiple disguises but, also poses as an author who needs quiet and seclusion to work on a book his is writing.

It is through this therapeutic writing exercise that we learn so much about Billy and his childhood tragedies as well as the horrors he experienced in Fallujah.  The internal struggles that Billy deals with help the reader to understand the real Billy, a man ultimately in need of redemption.  When a young, college student named Alice is drugged and viciously raped and dumped on the side of the road, it is Billy who rescues her and helps her heal from the physical and emotional trauma.  We suddenly see the softer side of Billy, a man with compassion but also one who understands in the need for justice.

I will admit this story took a while to get going but, once it did, everything just flowed making this a book that was so hard to put down.  Through Billy we get a taste of small town life as he goes about his business using different aliases along the way, talking with some towns people while he poses as a writer.  There are loads on literary references in this story which I enjoyed. Some of the locations where Billy finds himself are "red state areas" that allows the author to make several political observations which may annoy some readers, but that is a rather small insignificant part of what what ends up being a very satisfying crime novel.  I could definitely see this story playing out on the big screen. Highly Recommended

This was a combo read for me. The audio book, read by Paul Sparks was very well done. The audio download was made available at no cost to me by Simon & Schuster Audio and the print edition I borrowed from my local library.