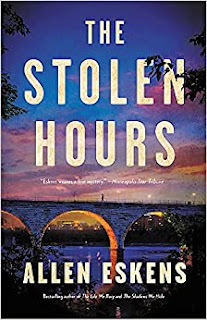 Lila Nash is a petite, young woman who has made a lot of progress with anxiety issues after she was drugged and attacked when she was eighteen years old. Both therapy and counting rituals have helped her succeed in law school and she now works in a Minnesota prosecutor's office. Her job isn't easy as Frank Dovey has an axe to grind and wants to see her fail. Lila is determined to succeed and when she is reassigned to work under Andi Fitch we see her confidence slowly building.

Gavin Spencer is a creepy, calculated psychopath and photographer. He has a distinct lisp and gets even with any woman who snubs him usually by doing away with the offender.  His most recent victim, Sadie Vauk, survived her attack and was able to identify him and,  the evidence is building against Gavin.  The more the evidence builds, the more Lila recalls similarities between her attack and the way Gavin operates.  This makes Lila more and more determined than ever to see him prosecuted for what he has done.

Without saying too much, I loved the way this story developed slowly, the details are so finely drawn and the pace was pitch-perfect.  The characters were expertly crafted. I especially loved that the women were so strong and determined. I enjoyed this one so much and did not want it to end so I read a few other books in between to make this story last.  The ending was both unexpected and thrilling.

Allen Eskens is a go-to author for for me.  One character, Joe Talbert who has been involved with Lila for six years has appeared in a few earlier offerings but, he played a minor role in this one so I feel this would work perfectly as a standalone novel.   If you haven't read this author previously, do yourself a favor an add him to your list.

Thanks go to Mulholland Books and NetGalley for allowing me access to the pre-pub eGalley.

Posted by (Diane) Bibliophile By the Sea at 8:01 PM