Book Review - Made in China: A Memoir of Love and Labor; Anna Qu 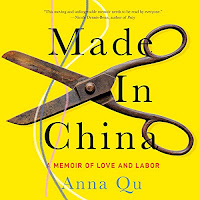 Made in China; A Memoir of Love and Labor; Anna Qu

Made in China, is rather sad memoir about what it was like growing up unloved and feeling like an outcast.  The author was born in Wenzhou China in the mid 80's. Her father died when she was young.  Her mother decided that if she stayed in China, with the one-child rule at the time, it would be unlikely that any man would want to marry her so she made a decision to leave her daughter behind with grandparents in China and go to America.  In New York her mother got a job at a Queens sweatshop and eventually ended up marrying the owner and having two more children.  In 1991 when Qu was seven, her mother brought her to live her new family which she had never met.

In America, Qu was not treated like her half-siblings, and never shown any love or attention. She had a room in the basement.  Unlike her half-siblings, as a teen she was forced to work 40+ hours a week in the sweatshop. Her mother was beyond strict, she was down right abusive and eventually Qu files a report with The Office of Children & Family Services, a decision which affects her later on.  An excellent student she was determined to succeed despite little encouragement and without her mother's help. While her mother wore designer clothes, Qu wore sweatshop clothes which made her stand apart from her classmates even more. Although she manages to go to college without her parents help there are more issues to contend with as an adult.

This was an eye-opening memoir that makes you think about the immigrant experience.  We learn about generations of struggles for women in China and the need for mothers to be tough.  Qu's bitterness, loathing and resentment is difficult to read about at times as you learn more about the complicated mother-daughter relationship here.  This memoir showed the darker side of a journey from China to life in America to what one would always hope to be a better life.

I downloaded this audio book from the public library. It was narrated by Catherine Ho who did a very good job with this memoir. Recommended.

Posted by (Diane) Bibliophile By the Sea at 8:37 AM