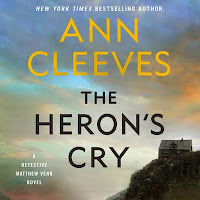 In Book #2 of the Two River series, Detective Inspector Matthew Venn returns to the North Devon coast to investigate a murder that took place at at an artist's studio.  Dr. Nigel Yeo is the victim and he was stabbed in the neck with a jagged shard of blown glass from his own daughter Eve's workshop and art studio.

The previous evening the deceased approached Matthew's homicide partner Jen Rafferty telling her there was something he wanted to discuss with her in private but, Jen had a little too much to drink so she gave him her number and asked if they could talk in the morning.  When her phone wakes her the next morning,  it is Matthew giving her the bad news and asking her to meet him.  Apparently, the late doctor was a patient advocate who had concerns regarding some suicides of patients with mental health issues. He was planning on voicing his concerns about the NHS and the way certain groups of patients were being handled.  When a second person is murdered under similar circumstances, the reason for the murders as well as the suspect pool widens.

Less than a month ago I read, The Long Call (Book 1 of this series) and I was quite impressed. In this sequel we see further development of each of the returning characters both professional as well as Matthew's marriage  and relationship with his husband Jonathan. I loved seeing how Jonathan is trying very hard to have Matthew rebuild his estranged relationship with his mother. I love the character driven style of this author and also the unique way in which her crime procedurals and investigations proceed.  There are lots of details and clues to take in and quite a few characters as well.  This was a very good sequel.  Someone mentioned that the Two River series will become a 4-part series for television.

Thanks go to Macmillan Audio and NetGalley for allowing me to download this audiobook in exchange for my unbiased review. The audio was narrated by Jack Holden who did a very good job.

Posted by (Diane) Bibliophile By the Sea at 7:56 PM