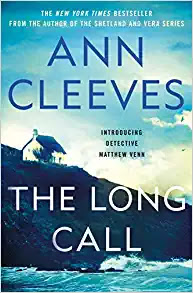 In this new series, Detective Inspector Matthew Venn is a 40-something, gay man who returns to North Devon and the strict evangelical community where he grew up.  Matthew has been estranged from his parents, disagreeing with their fanatical religious views.  His father has just died and Matthew is now happily married to Jonathan, a kind man who manages the Woodyard, an arts center that also runs a day program for developmentally disabled adults.

Matthew's first murder case here involves a body of a young man that has been found along the beach. The man later identified as Simon Walden was stabbed but, the reason that he was killed is a mystery. As Matthew and his partner Jen Rafferty begin to investigate Simon's murder, they learn he has struggled with alcohol issues and killed a young child while driving drunk. As the case develops this and a few other crimes that develop seem to have ties to The Woodyard which puts Matthew in a awkward position since his husband Jonathan is a manager there.

This is Book 1 of the Two River Series.  I was pleased with this book and I liked the soft spoken Matthew character, he's introspective, a little unsure of himself but, has keen observation skills.  His partner Jen is a single parent who has left an abusive relationship. She is quite different from Matthew yet, I think they will work well together. I'm curious to see if Jen matures a bit more along the way. There are several other characters which added a nice element to this crime mystery, including Lucy, a developmentally disabled young woman with a very protective father. There were also two other women like Lucy, Chrissie and Rosa who play into the mystery here. I love the writing style and all the little details about places and people that made the story a treat to read.  I did think the story started out slow but I do understand how that was necessary in order to learn about some back stories, introduce new characters, and to understand possible motivations of characters and suspects.  I just started to read Book 2, The Heron's Cry, which released on 9/7/2021 in the US.

I borrowed the print edition of this book from my local library.

Posted by (Diane) Bibliophile By the Sea at 7:19 AM