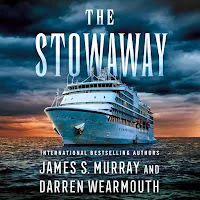 Maria Fontana is a Professor of Psychology at Columbia University and single mother to younger twins, she's in a committed relationship with Steve.  Two years early Maria sat on a jury where Wyatt Butler, was on trial for several murders. At the time Butler was portrayed as a brutal, ritualist serial killer.  The evidence however for the most part was circumstantial.  While eleven jurors voted for him to be convicted, one in good conscience could not convict him -- that juror was Maria and as a result Wyatt Butler was set free.  Soon a media circus ensued as well as outraged family members of the victims. It wasn't long before the public knew that Maria was the lone hold out juror.  Maria's  life became a living nightmare and the university made her take a force sabbatical.

Eventually to get away from her nightmare Maria decides that she, Steven and the children need a family vacation and book a two-week transatlantic cruise.  Just as the family begins to think of having some much deserved fun and relaxation, people begin to go missing onboard and it soon becomes evident that there is a killer on the ship.  When details of the killings are leaked Maria soon realizes that the details of the killings on the ship are eerily similar to evidence shared at the trial of Wyatt Butler.  Is there a copycat on board?

I couldn't recall reading a book that for the most part takes places on a transatlantic cruise ship but the setting was perfect and, because of the ship's size there were plenty of places for the cat and mouse game of a serial killer.  There wasn't much character development in this book but, it certainly was intense. This was a very addictive story but not a book for all readers as the serial killer targets mostly children and the details are quite specific.  If you're the type of reader who say keep telling yourself "it's not real, it's fiction," we found it to be a riveting thriller. We listened to the audio version in 2-days flat and we were satisfied with the way the story played out.

The audio book was read by Barrie Kreinik who did a fantastic job ramping up the thrills and chills. Thanks go to Macmillan Audio and NetGalley for allowing me access to this audio book in exchange for my unbiased review.

Posted by (Diane) Bibliophile By the Sea at 3:21 PM