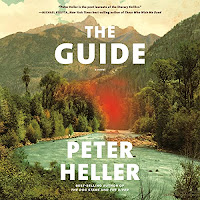 In 2019 I read Peter Heller's book The River which took place in Canada and I really enjoyed it.  This new book, The Guide, has Jack returning to the river but, this time the setting is Colorado. Jack is still dealing with grief: his mother's violent death and a tragedy involving a best friend. He has been hired by The Kingfisher Lodge, as a fishing guide to wealthy clients looking for peace and relaxation and, this may just be the job that helps Jack move beyond his grief. The story takes place in a post-COVID world but where another type of virus is threatening.  The lodge is nestled in a canyon with the most beautiful waters yet the grounds are surrounded by high razor wire fences, locked gates and signs warning trespassers who wander beyond the grounds that they risk getting shot.  What is really going on around the so-called "billionaire's mile?"

Jacks first client is a famous young female singer named Allison seeking the relaxation and someone to bait her fishing line. Although the two get along well Allison comes across as someone who is quite meek and not at all the way you would imagine a famous singer to be.  Shortly after the story begins there is a loud scream during the night and things begin to happen.  Although the setting was nicely described, the storyline itself did not work well for us.  For example, on a few occasions Jack's job is in jeopardy for policy violations yet he never gets fired and still freely snoops around when you would expect that video surveillance would be everywhere. There are also some strange things going on that make the reader realize that something at Kingfisher Lodge and the surrounding property isn't the peaceful place it claims to be.  The story eventually goes to a very dark place which involves young children. The happenings didn't seem at all plausible and the ending seemed unlikely as well.  After enjoying, The River, this follow-up just did not measure up.

I borrowed this audio download from my local library and fortunately is was shorter than most books. Mark Deakins narrated the book and did a decent job but, overall, we found this book very disappointing.

Posted by (Diane) Bibliophile By the Sea at 2:37 PM