Book Review - Should We Stay or Should We Go? Lionel Shriver 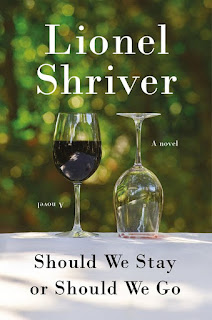 Should We Stay or Should We Go; Lionel Shriver

In 1991 when Kay Wilkerson's father dies in his 90s, Kay feels nothing but relief.   Kay felt that Alzheimers, in reality,  took her father from her some ten years earlier.  Kay and her husband Cyril are medical professionals for the NHS. Kay is a (National Health Services Nurse) and Cyril a NHS doctor.  Both of them realize that living a long life does not mean living a quality life.  After some discussion, Kay, now 51 and Cyril just slightly older, make a pact.  They decide that when Kay turns 80 the two of them will end their life with a lethal cocktail so that they won't be a burden to anyone.  Sound simple?

Fast forward and it's 2020 and Cyril has turned 80 and Kay will be there soon. They are both in pretty good health. What about the pact? Over the next (12) chapters some very different scenarios play out - some are quite funny and downright cynical, while other scenarios fell flat. Topics like Brexit, the NHS, the pandemic / lockdown, immigration and other sometimes controversial issues arise.

I'm not sure what I was expecting when I began this book somewhat blind.  I did think it was about an elderly couple deciding to end their life at the same time.  I really thought I would enjoy it but, I ended up being disappointed. My biggest complaint about this book, was not the story itself but the writing.  I found her literary style rather pretentious and after a while just plain frustrating.  It was like she chose to use a version of a word that had the least frequently used synonym.  Here are just a few of those unusual word choices: Wherewithal - tautology - horlicks - ebullience - propinquities - foetal and that was just some of them in the first 100 pages or so.

It's been a long while since I read a Lionel Shriver book. In fact, I checked it was the summer of 2013 when I read both: We Need to Talk About Kevin and Big Brother.  While I liked both of those well enough (especially Kevin), I'm wondering whether her writing style has changed drastically over the years?  Have you read this author recently, if so, what did you think?

eGalley provided by Edelweiss and Harper Collins in exchange for my unbiased review.

Posted by (Diane) Bibliophile By the Sea at 8:04 PM