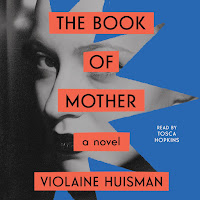 The Book of Mother; Violaine Huisman

Translated from French by Leslie Camhi, The Book of Mother, is a deeply moving and, at times, a rather painful read.  It is a story about dysfunctional mother/daughter relationships: what goes on and how the individuals are affected by the emotional trauma and abuse later in life.

The mother, Catherine, A.K.A. "Maman" is a beautiful but broken woman who suffers from mental illness in the form of manic depression.  Her daughters Violaine age 10 and Elsa, age 12 are the victims of their mother's instability in the form of sometimes violent mood swings and just an overall pervasive chaotic, unpredictable home environment.  The story takes place in Paris in the wake of Catherine's third marriage falling apart.  There is a horrible scene when she deliberately drives her car into traffic with the two daughters in the car.  Fortunately, everyone survives but it's clear that Catherine needs an intervention and  psychiatric stay.  The girl's father (second husband of Catherine) isn't interested in being tied down raising his daughters so the girls try to hide their situation from school officials - at least for a while.

The story is told in three parts - first by young Violaine (yes, same first name as the author but this is debut fiction, one which has a semi-autobiographical feel.)   We learn through Violaine what went on in the household and how she and her sister tried to understand the many things they witnessed and how their mother could mistreat them as she often did.  We also learn about Catherine's early life through a third person POV, which helps the reader understand what has "perhaps" happened early on to cause her to behave as he does and what triggers her violent mood swings.  Finally, the last part deals with the sisters as adults and trying to process what they have endured try to move forward with their adult lives.

I'm always interested in stories involving dysfunctional/mother daughter relationships.  Catherine comes across as vain and self-absorbed yet, there were moments when I felt for her and what had happened to her when she was younger.  This is a tough read but, it is well-written and the translation is excellent as well.  One thing that struck me was how much these sisters loved their deeply flawed mother despite all they had to endure.  Potential readers should be aware of potential triggers: sexual abuse, mental illness, substance abuse and suicide.

This was a combo read/listen for me. The audiobook was narrated by Tosca Hopkins who did a very good job. The eGalley and audio download were provided to me at no cost by the publisher and Edelweiss in exchange for my unbiased review.