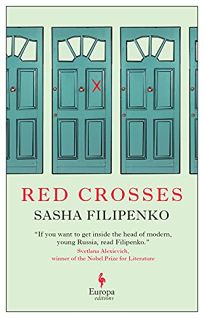 It's a rare book that has an overall sad storyline can also make the reader smile at times.

Sasha Alexander is a 30 year old widower and father of a young daughter whose life is in upheaval since the loss of his wife.  He moves back to Minsk in an effort to move beyond his loss.  Oddly, on the door of his new apartment he finds a large red cross.  It isn't long before he learns the culprit is his neighbor, the 91 year old Tatyana Alexeyvena who is slowly losing her short term memory. She painted the crosses as a way to find her way back to her own apartment.

With her long term memory pretty much intact, Tatyana is anxious to tell her new neighbor her earliest memories. Born in London, she moved to Russia at the age of nine (her father was Russian).  She marries, has a daughter and her husband eventually became a POW in WWII.  If that isn't terrible enough she was seen by the Russian government as a traitor and sent to the gulag for a decade where she was tortured.

So it's probably difficult, based on this, to see how a story like this could occasionally make me smile yet, it did. I loved the Tatyana character and the way she tells us about her past. Although she seemed lucid most of the time,  memory is a funny thing even for those of us who still seem to have it all together.  Do we always remember the painful parts of our past exactly as it happened?  For a story that is only about 200 pages, this wasn't a quick read for me. The translation was very good but the way the story is told takes took time for me. There are telegrams, poems, letters peppered within the story.  I do wish Sahsa's story was a bit more developed but, overall, this book was well-done. It's been a long while since I've read a book translated from the Russian so I was happy I tried this one.

The eGalley was provided to me as a free download courtesy of Europa Editions and Edelweiss in exchange for my unbiased review.