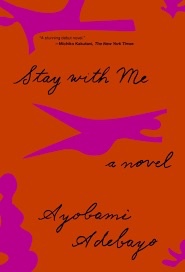 Akin and Yejide are a young professional couple in Nigeria who after four years in remain childless. Akin is pressured by his mother Moomi, to take a second wife who can give them a child.   She even has the woman in mind, her name in Funmi.  Akin and his wife do not believe in polygamy but after trying fertility specialists, healers as well as some bizarre folklore beliefs still no pregnancy.  Of course, it is assumed Yejide is to blame.  When Yejide learns about the second wife she feels desperate to get pregnant and, this is where the story gets interesting.  I can't say too much more about the storyline without giving spoilers but, this story was decent and had plenty of discussion points.

The story covers the periods 1985 - 2008 with a backdrop of political turmoil. The story is told in      alternating POVs from the two main characters who were well-developed yet unlikeable in their        own ways.  The story is heavy in dialogue with a blend of extremely sad moments and laugh out      loud scenes as well which was nice as this book could have been a real downer.  I liked                      learning about the Nigerian culture and the value placed on offspring above all else.  My book          group met to discuss this one this month and most thought it was an interesting read but no one really loved it.  Readers who like learning about other cultures should try this one.

Posted by (Diane) Bibliophile By the Sea at 6:38 PM