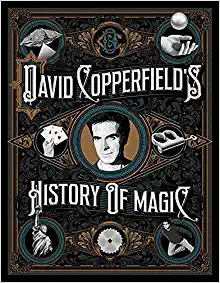 I was lucky enough to see David Copperfield's Las Vegas magic extravaganza about twenty years ago, it was such a fantastic show.  So when I saw this new book I knew I'd want to listen to it.  Somehow I thought this was a memoir and in a small part it is but, the book is so much more.

David Copperfield, a New Jersey native, was a shy kid who at the age of ten asked his mother for a ventriloquist dummy -- so began his fascination with magic and illusion.  He was the youngest person ever to be accepted into the Society of Magicians.

Anyone who has had an interest or curiosity about magic should check this book out. I loved it.  The audio was read by David Copperfield and Fedor Chin who were both excellent and highly recommended. However, now I want to get a copy of the print version as I understand there are some 100+ photographs and objects from Copperfield's Museum of Magic.

Audio download was provided to me by Simon & Schuster Audio in exchange for my unbiased review.

Posted by (Diane) Bibliophile By the Sea at 6:15 PM