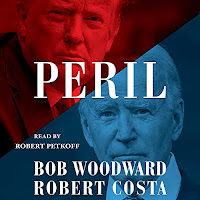 Peril is the third book by Bob Woodward about the Trump Administration; it follows Fear and Rage  (which I did not read.) I was particularly interested in this book as covers much of the final year of the Trump presidency as well as the first 100 days of the Biden presidency.  I also have a lot of respect for both Bob Woodward and Robert Costa as journalists who, in my opinion, speak the truth.

The book has 70+ chapters and is the result of some 200 interviews, transcripts, emails, secret orders and diary entries from individuals who were said to be inside sources.  Just a few of the eye opening chapters included Trumps admission to downplaying the seriousness of the coronavirus, General Milley's need to take action after irrational behavior by Trump. Paul Ryan's concerns about the amoral behaviors of a narcissistic president. Trumps continuous pressure on Mike Pence to overturn the free and fair election, as well as the Pence call to Dan Quale asking his opinion. Trumps unwillingness to accept the reality of a lost reelection bid and jeopardizing democracy in the process, and the Trump presidency culminating in the January 6th insurrection.  There is also to a lesser degree background information about information about Biden and his campaign as well as, Biden's first 100 days which includes lots of detail on the Rescue Act and what it took to get it passed.

A worthy read for readers interested in politics. I'm pretty sure regardless of your political preferences, there will be some eye opening moments and insight gained by reading this book.  The problem, I suspect, is whether some will choose to believe what they read in this much divided nation of ours.

The audio book was narrated by Robert Pertroff who did a fantastic job. The audio is 13+ hours  and the download was provided at no cost to my by the publisher in exchange for my unbiased review.

Posted by (Diane) Bibliophile By the Sea at 5:35 PM