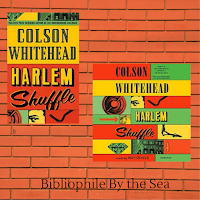 After being so impressed and moved by Colson Whitehead's last book, The Nickel Boys,  I decided anything the author wrote next would be an automatic read for me.

In Harlem Shuffle the reader is transported to 1959 Harlem, NY where we meet Ray Carney, a black man and the owner of Carney's Furniture on 125th Street.  Ray went to business school and tries to be an upstanding business man unlike his father Mike, a shady character and not at all a role model for his son.  Ray is also a decent family man who definitely married above his class as his wife Elizabeth comes from a prominent family.  Elizabeth is expecting their second child which means their small apartment will soon be a little more cramped.  For a little extra cash flow Ray begins to take in a few items from his cousin Freddie to sell, of course the items are likely stolen.  What starts out as only slightly dirty hands soon turns into something bigger and involves a bad element from bad cops, gangsters , crooked politicians and bankers and other bad-seed elements of society.  Ray's job now is to find the balance and survive and that won't be easy.

This novel is divided into tile periods: 1959, 1961 and 1964 and the real life Harlem Riots.  This story is vastly different fro The Nickel Boys, but it has well developed, memorable characters that help drive the story as well as a sense of place that seems to come alive as well.  I thought this novel was different and enjoyable. I liked the way the author captured Harlem, its people, the discrimination and the police violence.  The genre is hard to characterize but, to me it was darker crime story but, it did have more than a few funny scenes.

This book was a combo read (eBook) and audio download. The audio was narrated by Dion Graham, the same person that narrated John Grisham's book: Sooley. He did an excellent job once again.  These books were made available to me at no cost in exchange for my unbiased review.