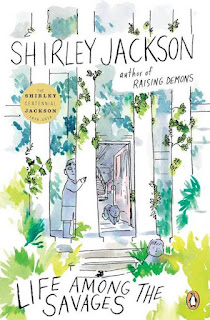 Life Among the Savages; Shirley Jackson

Every October I automatically peruse a list of books available by author Shirley Jackson. Generally it's because I'm looking for a darker or creepier type of story but, this year I came across, Life Among the Savages,  and I ended up loving it. The book was originally published in 1953, the audio in 2015 is read by Lesa Lockford who did a great job.

This was written as a series of essays featuring an unnamed mother and father with two children who learn they are being evicted from their New York City apartment.  They decide to move to rural Vermont with their two children who are not yet in school.  It's the early 1950s and the family doesn't drive, but they do own thousands of books (love them already) which will need to be transported.  Both parents smoke and like their wine and while the mother tries to do it all the father seems unfazed by all that needs to get done. They end up living in an ancient house and besides getting settled, figuring out logistics in their new locale,  the youngest child has to get enrolled in kindergarten, there is shopping (without a car initially) meal preparation and more.  It's clear this woman, this family needs help.  She can't count on her hands-off husband who eventually ends up teaching a couple of classes at Bennington College, and when home spends some time writing and obsessing over his coin collection.  An attempt at hiring some part time help leads to some very funny outcomes.  If the mother isn't stressed enough, over the course of the book she gives birth to two more children.  Don't get me wrong the father came in handy when they found themselves with rodents - another hilarious event.  Book one of this bio ends shortly after the birth of the couple's fourth child.

Are you familiar with Leave to Beaver the 1950/60s series with the Clever Family. Remember June the perfect stay-at-home mom and Ward, the dad who went to work each day, dinner was always ready, the house always perfect? Well, this family isn't like them in the least but, they were so fun to spend time with and get to know.  It's no wonder Shirley Jackson died before her 50th birthday, in her sleep, as she napped one afternoon in 1968.

Growing up in the1950s and 60s (we didn't have a car then either), I could definite relate to a few of the conundrums this family found themselves in.  I just requested book #2 of her child rearing exploits, Raising Demons from the library; it should be fun.  Have you read this one?

(I downloaded the audio from my public library.)

Posted by (Diane) Bibliophile By the Sea at 9:57 PM