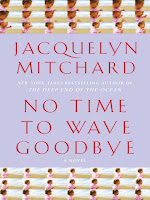 No Time to Wave Goodbye, by Jacquelyn Mitchard, is a sequel to her 1996 novel, The Deep End of the Ocean, which was later made into a movie.

In  The Deep End of the Ocean, three year old Ben Cappadora was kidnapped, and surprisingly, he returns home nine years later.

In Mitchard's latest novel, the Cappadora children are grown. Vincent, an older brother of Ben, films a documentary about five families whose children were abducted and are still missing. Sister Kerry helps with the film.

At the screening of the documentary, Beth, the mother, is shocked when she learns what the film is about.  The film begins to stir up old wounds and emotions among family members.  When the film is nominated for an Academy Award, everyone is thrilled for Vincent, and everyone is looking forward to the big event.  While the family is celebrating at the ceremony, the happiness they are feeling becomes short-lived when the unthinkable happens --another abduction occurs, causing all the past terrors of such a horrible event to be relived.

My Thoughts:  A good story with some poignant and skillfully drawn out scenes, kept me turning the pages. However, all was not perfect with this novel. There were boring and unnecessary details (which seemed to go on forever) about Hollywood, fashions and makeovers.  There were also some highly improbable events that occurred. The author did redeem herself, in my opinion, by tying up some loose ends rather well.

RECOMMENDATION: To get the full impact of the story, I would recommend reading The Deep End of the Ocean first,  or at least watch the movie, if you have not done so already.
Posted by (Diane) Bibliophile By the Sea at 9:37 PM

Email ThisBlogThis!Share to TwitterShare to FacebookShare to Pinterest
Labels: Books That I Liked, Library Books Read