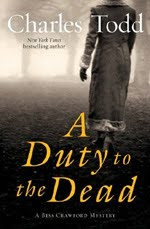 A Duty to the Dead, by Charles Todd is the first in a new mystery series. The novel takes place in 1916, and is set against a backdrop of WWI.

Bess Crawford is a British Army nurse who has been working in the battlefields of France. On her way home on the ship Britannica they hit a German sea mine off the coast of Greece.  Though her arm is broken as a result of the incident, Bess escapes serious injury and is able to get to safety in England.  It is in England that Bess feels a duty to follow up on a promise she made to a dying soldier.  Bess agreed to take a somewhat cryptic message to the brother of the soldier......

"Tell Jonathan that I lied. I did it for Mother's sake. But it has to be set right".

When she delivers the message, Bess is disturbed by Jonathan's dismissive response.  She then becomes involved in a family conflict which ends in murder.

My Thoughts: In this psychological mystery, the wounds of war are vividly described. Women are forced to fill in for the men who went off to fight in the war. Returning soldiers and their family members are left to cope with the physical and psychological aftermath which results to some who serve our country.   Add to this family secrets, and a wise, independent and likable sleuth like Bess Crawford, and this new series should be quite popular. I found myself anxiously turning the pages of this engaging mystery. You might be surprised as I was, to discover that the authors are actually a mother and son team: Caroline and Charles Todd. RECOMMENDED

(The finished book was sent to me by the publisher: Harper Collins) Thank you.
Posted by (Diane) Bibliophile By the Sea at 7:44 AM