168 - The Time of My Life; Patrick Swayze and Lisa Niemi 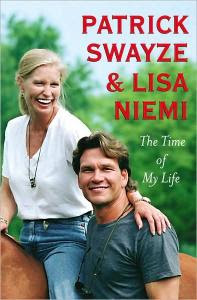 I was so looking forward to this memoir by Patrick Swayze and his wife, Lisa Niemi, and I was not disappointed.  The memoir begins with a brief overview of Patrick's diagnosis and 20 month battle with pancreatic cancer, which began in January of 2008. But this story is not all about his illness, in fact just the beginning and the end talk about his battle with cancer.  Instead, The Time of My Life, is really more a story about Patrick Swayze's life.  From his humble beginnings, to his love for family, to how he met his wife Lisa, who was the love of his life for some 34 years. Patrick Swayze's successful career on stage, screen and television is described in detail, and it is easy to see how he became one of the most loved actors of his time.

The last section of this memoir touches a bit more on Patrick's cancer battle, his treatment, and the struggles with the disease he, with his wife at his side, endured. Initially I was a bit concerned that this memoir might be too sad for me, as pancreatic cancer has touched the lives of two of my family members, but that was not the case. This book was more of a celebration of Patrick's life, and it does not dwell on his illness nor his death. Patrick Swayze died with his family by his side on September 14, 2009, at age 57. This memoir, The Time of My Life,  is a beautiful tribute to his life. RECOMMENDED
.
Posted by (Diane) Bibliophile By the Sea at 11:24 PM