169 - The Recipe Club: A Tale of Love and Friendship; Andrea Israel and Nancy Garfinkle 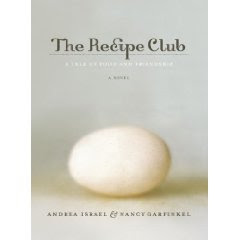 After falling in love with Julie and Julia, I was thrilled to have received a copy of : The Recipe Club: A Tale of Love and Friendship. (This book was received from Caitlin Price at FSB Associates).

Lilly and Val are lifelong friends, united as much by their differences as by their similarities. Lilly, dramatic and confident, lives in the shadow of her beautiful, wayward mother and craves the attention of her distant, disapproving father. Val, shy and idealistic—and surprisingly ambitious—struggles with her desire to break free from her demanding housebound mother and a father whose dreams never seem to come true.

In childhood, “LillyPad” and “Valpal” vow to form an exclusive two-person club. Throughout the decades they write intimate letters in which they share hopes, fears, deepest secrets—and recipes, from Lilly’s “Lovelorn Lasagna” to Valerie’s “Forgiveness Tapenade.” Readers can cook along as the girls travel through time, facing the challenges of independence; the joys and heartbreaks of first love; and the emotional complexities of family relationships, identity, mortality, and goals deferred.
But no matter what different paths they take or what misunderstandings threaten to break them apart, Lilly and Val always find their way back together through their Recipe Club . . . until the fateful day when an act of kindness becomes an unforgivable betrayal.

Now, decades later, while trying to recapture the trust they’ve lost, Lilly and Val reunite once more—only to uncover a shocking secret. Will it destroy their friendship, or bring them ever closer?

My Thoughts:  I generally like epistolary style novels, and I thought this book was very good. I enjoyed the friendship aspect of the story of these gals, polar opposites, who began as pen pals, writing letters, and exchanging recipes at an early age. As the girls entered adulthood, letters turned into emails, and the carefree life and secrets of childhood, became real life problems and stresses of adulthood. I also enjoyed the way some 80 recipes were included, along with photos and illustrations.  I actually tried the Starry Night Scampi and the Stuffed Peppers (which we enjoyed), and hope to try the Peanut Butter Blondie bars soon too.  If you are looking for something more in a novel than a story about the trials and tribulations of friendship, then this book may be worth a try.