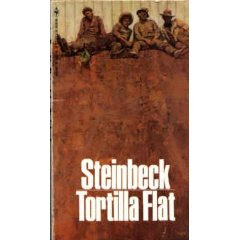 John Steinbeck's Tortilla Flat, is a novella (fewer than 200 pages), but it packed a punch.  The story takes place during the Great Depression, in a shabby town outside of Monterey, California.

Danny, the protagonist of this story, has returned from WWI to find that he has inherited two houses.  One by one his friends, "paisanos", come together to stay at Dannys.  The "paisanos", described early on by Steinbeck as, " a mixture of Spanish, Indian, Mexican, and assorted Caucasian bloods......he speaks English with a paisano accent, and Spanish with a paisano accent".

The paisanos have good intentions, but there always seems to be a little something in it for them.  They are fiercely loyal to one another, and together they spend their days, jobless, drinking wine, debating, engaging in occasional fights, and spending time with the women of the town.  They steal from their neighbors, but help people in need, and they seem perfectly content with their lives, living peacefully in poverty.

Reminiscent of the tales of King Arthur, Tortilla Flat was a wonderful story.  Steinbeck's amazing ability to bring his characters to life, as only he could. The characters were flawed, but endearing men who will make you laugh and possibly even make you shed a tear or two. I was eager to turn the pages, and at the end, I only wished that the story went on for a while longer.  If you have not read this book, do so soon. Recommended

Email ThisBlogThis!Share to TwitterShare to FacebookShare to Pinterest
Labels: Books That I Liked, TBR Stacks