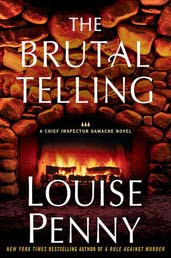 This is the first novel I've read by Louise Penny, and I must say that I am sorry, I've waited this long. The Brutal Telling is the fifth novel in the Chief Inspector Armand Gamache series.

(p. 3) "Chaos is coming old son, and there is no stopping it. It's taken a long time, but it is finally here".

The story takes place in Canada -- Surete du Quebec, in a quaint little village known as Three Pines. A hermit, that no one in the village seems to know is found dead in the town's popular bistro. His death does not appear to be an accident, and his death occurred elsewhere. The dental examination on the victim, indicates some expensive work had been done in the past. So the hermit was not always poor, appeared to be in his 70's, but upon examination was more likely in his 50's. What happened to age him so much? Who was the victim? Why was he killed? Who killed him? What was the murder weapon? Where was he murdered? Why was he moved?

As Inspector Gamache and his team begin to investigate, it seems like several people could be suspects. As layers of lies are stripped away and the truth begins to come to the surface,  one thing is clear. It appears that in the tight-knit community of Three Pines, most everyone seems to have their secrets.

My Thoughts: This light mystery drew me in from the very beginning, and held my interest until the truly surprising conclusion. The writing style was great, and I love when an author can make me experience the sights, the smells and the feel of a novel as Penny did. An eccentric cast of well-developed characters, combined with the warm small town charm, made this the perfect book to curl up with on a cool fall night. I will surely be looking forward to reading the first four books in the Inspector Gamache series. I really enjoyed this story. I think it might have even been more enjoyable, had I known a little more about the characters from her earlier novels.  (I'll be looking for these as well). Thanks to Shelf Awareness and Tara Cibelli of St Martin's Press for sending an advance copy my way.

Recommended.
Posted by (Diane) Bibliophile By the Sea at 8:22 PM