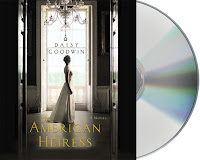 
Cora Cash is one of the most beautiful and richest Gilded Age debutantes. At her coming out ball in Newport, Rhode Island, her mother, a domineering, and obnoxious social climber, has a mishap with leave her face disfigured, and although her face is altered, her contemptuous  personality remains unchanged.  The fact that Cora feels deeply for her American suitor Teddy Van Der Leyden, means nothing as far is Cora's mother is concerned. Teddy comes from a prominent family, but Mrs. Cash believes that only an English Nobleman will due for her daughter, because if Cora becomes the wife a wealthy aristocrat, Mrs Cash' social status will be elevated as well.

Cora, who wants to get away from her domineering mother, agrees to accompany her to England, soon after the ball. Her black servant Bertha, who is totally dedicated to Cora accompanies them.  Soon after arriving, Cora is thrown from a horse and is injured.  As fate  would have it, she spends her time recuperating at the home of the handsome and eligible, Ivo, Duke of Wareham.  It isn't long, a few weeks, before the Duke proposes marriage to Cora.

Their marriage is not a "and they lived happily ever after" story.  Married life is difficult for Cora. Although she wants to be a good wife, her husband turns somewhat aloof and secretive.  Cora begins to wonder if her ever got over his former love interest, or was it Cora's money that appealed to him.  Cora also has to deal with being scorned and looked down upon by her mother-in-law and others.

Cora was a likable character, but for an intelligent girl with lots of money and status, she seemed extremely naive. He life among the British was one disaster after another, and she couldn't seem to anticipate any of it.  Cora's mother on the other hand, was as obnoxious as her mother-in-law, snooty society elitists. Her husband Ivo was a piece of work.  Cora's servant Bertha was an endearing character --I liked her a lot.

The audio book was fun to listen too, and the reader was very good. (She had the snob voice perfected).  I liked all the historical details about the customs, the estates, the balls and clothing, but parts seemed a little bogged down and I was occasionally tempted to fast forward certain sections. I also thought the ending seemed a little open ended, so I am wondering whether there might be something else planned.  Fans of historical, period novels might find this a fun summer read.
Posted by (Diane) Bibliophile By the Sea at 8:17 PM