A Kind of Intimacy; Jenn Ashworth 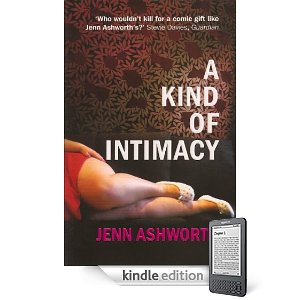 Annie Fairhurst, 27 and newly single has just relocated to a British suburb with her cat, Mr. Tips. Annie is an obese and socially awkward young woman, who actually seems content with her size and who she is.  It is important to her to make a good impression with the new people she meets, so she has immersed herself in personal development books about socializing and making conversation.  She's vague about her past, and when she does talk about it, you are never quite sure if she is telling the truth.

In her efforts to make friends and get to know her neighbors she decides to throw a housewarming party. She sends out 30 invitations, prepares a hedgehog centerpiece with pickled onions for eyes, and raisins for the irises, sets out her cow shaped milk pitcher, among other treats, and is ready for the party to begin. She thought the centerpiece would make for some good conversation.  Although the party is a disaster in the eyes of those she was trying to impress, she thinks it went well.  She even believes the friendliness of her next door neighbor Neil, is really a romantic crush on her. The fact that Neil has a cute, 19 year old live-in girlfriend named Lucy, is not even a factor in Annie's eyes, because she knows if Lucy were gone, they would be together.


"Sometimes I liked to imagine that Neil's bed was pushed up against the wall like mine, so near that I could hear his breathing. There was nothing inappropriate with my imaginings, far from it. Just the thought of hearing someone nearby helped me to sleep."

" The newspaper he gave her felt like a lover's token, a little indication of his concern for me. "

An unreliable narrator, as the story progresses, the reader gets some insight into Annie's past: her very sad childhood, her problematic marriage, and the risky behavior she has engaged in,  all in attempts to find love, acceptance and companionship.  It's clear she is delusional and pretty much the "sociopath next door".   Each new chapter shows you just how twisted and laughable her logic is.  Just when you think she's gotten herself into the worst mess possible, something new happens, and it isn't long before her past catches up to her.

Annie is a whacky gal, who I found endearing in a bizarre sort of way.  At times I pitied her, and her desperate attempts for love and acceptance.  The story is dark and addictive. An unforgettable birds-eye view of the dark side of a fractured mind.  I LOVED this book, and it is without a doubt, my favorite book read in 2011.

(If you are serious about wanting to read this book, DO NOT read the Publisher's Weekly review of it -- it contains MAJOR SPOILERS).
Posted by (Diane) Bibliophile By the Sea at 3:24 PM