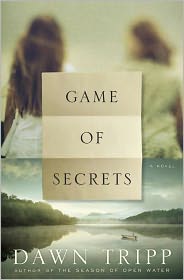 , the lives of two women, two families are tied forever by a unsolved crime and secrets of the past.  In 1957, Luce Weld, father to (12) year old Jane disappeared.  Luce was a womanizer who had been having an affair with Ada Varick. Ada was married to Silas at that time, but left her husband the year her son Ray was born.  What exactly happened to Luce, is unknown, however in the 1960's a skull with bullet hole in it was found, and it townspeople suspected it could have been Luce.

Now in 2004, Jane still has never really gotten over the disappearance of her father.  Her relationship with her own adult daughter, Marne, who has just returned back to New England from California, has suffered as well.  Marne, soon begins a relationship with Asa's son Ray.  Jane, now 60, and Asa, 80, meet for weekly Scrabble games. Initially, not much is discussed about the past, or the affair between Asa and Jane's father, but little by little a power play with words over a weekly board game brings the details of the past to the forefront.

This novel has it all, a mystery with an addictive plot and plot twists, complex characters, a scandalous affair, complete with details of clandestine meetings. Literary thriller fans will enjoy this creative work.  I was hooked from the very beginning, and I was able to read this book in just one afternoon. It is certainly one of the best literary thrillers, that I've read in a while.
Posted by (Diane) Bibliophile By the Sea at 9:01 PM