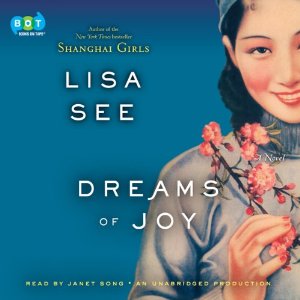 
Dreams of Joy is a story that begins where the author's previous novel, Shanghai Girls left off. The former covered the period of time from 1937-1957.  In this novel, it's 1957 and the author introduces sisters Pearl and May once again.  Joy is a student at the University of Chicago, who has learned the truth about her mother and her aunt.  Excited by all of the propaganda she has heard about changes in China, under Chairman Mao's leadership, she decides to leave school for Shanghai to help with the revolution and search of her real father, a famous artist called Z.G.

When Pearl learns what Joy has done, she heads to Shanghai days later in hopes of bringing Joy home.  However, with all the red tape, getting connected with Joy initially proves difficult, as she had already connected with Z.G, and the two had headed to a commune where Z.G was sent by the government to teach painting to peasants. The commune, Green Dragon Village was located  far out in the country. At first Joy is thrilled with being there and doing what she feels is making a difference. She even meets a young man named Tao, a peasant farmer, who she ends up marrying.  The marriage turns out to be a huge mistake.

It isn't long before the situation in China is terrible.  People were told to have more children so that there would be more people to help in the fields. What resulted were people starving, people forced into slavery, and even instances of cannibalism. Despite the disasters of all of the programs people were forced to implement,  they were required to paint pictures portraying the successes of the new programs.

Without giving away too many details, about what else happens, I'll just say that despite all of the bleakness in this novel, I was happy with the ending, although it seemed somewhat rushed. Pearl's love for Joy shined through again and again.

All of the characters were well developed, and although I liked Joy, I found her incredibly naive, and foolish. For example, she willingly surrendered her passport when she entered the country. The story is told from alternating viewpoints of Joy and Pearl. I loved learning about what China was like during that period of time, and although this is a work of fiction, I suspect that the author's descriptions were accurate for that period of time.  I liked this novel a lot, and think that reading Shanghai Girls first, is a plus.
Posted by (Diane) Bibliophile By the Sea at 10:16 PM