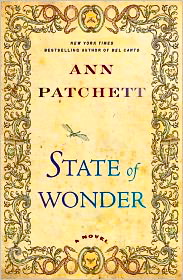 "The news of Anders Eckman's death came by way of Aerogam, a piece of bright blue airmail paper that served as both the stationery and, when folded over and sealed along the edges, the envelope. Who even knew they still made these things? This single sheet had traveled from Brazil to Minnesota to mark the passing of a man, a breath of tissue so insubstantial that only the stamp seemed to anchor it to this world...................."

So begins the State of Wonder, as the CEO of Vogel Pharmaceuticals, Jim Fox, delivers the bad news to Marina Singh, a research scientist for the company who had worked as a research partner with the late Eckman.

Anders Eckman was sent to Amazon some two years earlier to report back on the progress of a research and development project involving the possibility of continued fertility for women late in life, as was believed to be the case with the Lakashi tribeswomen living there.  The project has been headed by Dr. Annick Swenson for a over 10 years.  However, Dr. Swenson has failed to keep the company informed about how the project is going, and the CEO is feeling pressured to speed up the process so that the miracle drug can be submitted to the FDA.  Now with Eckman dead,  both Mr. Fox and Eckman's wife want answers. "Why was Eckman buried there, and did he really die of a fever?"

Marina, 42 and single had once studied with Dr. Annick Swenson, who is now in her 70's and has been in the Amazon for over a decade. Years earlier Marina left her training as an OB/GYN doctor for a position as a research scientist, after a surgery she was performing under Dr. Swenson went terribly wrong. She vowed never to treat patients again.  Jim Fox, as Marina calls him, thinks she is the person who must take over now that Eckman is dead. Marina, has been having a discreet relationship with Mr. Fox (as she calls him) for a number of years.  Marina agrees to leave her comfortable and solitary life doing research to travel to the primitive jungles of the Amazon, where death and illness are ever present.

Not only is Marina ill prepared for this trip, but her anti-malarial medicine, Larium, has been causing her nightmares about the very things that have haunted her since childhood.  In addition, her luggage is lost, and, once she arrives she is told by Dr. Swenson that she should not have come.  It isn't long before she is thrust into the jungles, and she learns what Swenson's research has involved.  In the process, Marina is forced to deal with many of the issues she has long avoided.

I've long been a fan of Ann Patchett, having read,  all of her books except Bel Canto, which I hope to rectify soon. As with her other books, this book is another winner.  I thought the strength of this book was the locale, contrasting the cold Minnesota winters to the hot and humid climate of the rain forest.  The writing was rich and descriptive, and beautifully detailed. At times I felt like I should be swatting some mosquitoes as I read this book.  I loved the element of suspense that strung me along for a page-turning experience, and which included a twist I had not anticipated.  The book dealt with some ethical issues, but I liked the fact that the author did not take sides or debate the issues, even though Dr. Swenson at one point stressed the merits of the project.

One complaint I had was the way that Mr. Fox seemed to so easily send Marina, a woman he obviously cared for, out into the dark unknown. A quiet, reserved woman, she seemed like such an unlikely candidate to investigate the death of her coworker, and to delve into what was going on with the project.  Initially, I thought he was spineless, but in the end, I realized Marina was the perfect choice for the assignment, as the entire ordeal forced her to deal with her past and with the issues that has troubled her for so long. An excellent story - read it.
Posted by (Diane) Bibliophile By the Sea at 3:18 PM