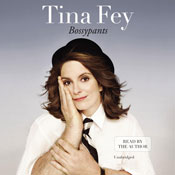 I've always enjoyed memoirs, and when I heard about Bossypants back in April, I knew that only the audio book would do for me - after all, it's read by the author herself, and with Tina's terrific sense of humor, I suspected I would be pleased.  My first intro to Tina Fey was during the last presidential campaign when her humor landed her major accolades as a Sarah Palin impersonator. I thought she was awesome in this role, and I have been a fan of hers ever since.

In her memoir, she begins by telling us how she was a "change of life baby", and the fact that she grew up in Philadelphia. She shocks us by saying that she was slashed in an alley by a stranger as a young child, but chooses not to elaborate on what happened!  She then goes on to share stories about growing up, a memorable story about her father and his Greek heritage and his quirks. There are also stories about her mother, brother, school, a honeymoon cruise nightmare, jobs she held and the difficulties faced by women in her field. Well,  you get the picture.

One thing  that shines through again and again is Fey's sarcastic sense of humor. At times I found myself laughing out loud as I was driving in my car.  I'm sure people who saw me at traffic lights must have thought I was smoking something.  Because I was listening to the book rather than reading it, I do not recall all of essay titles, except her intro essay, "Origin" - how Tina Fey came about as a "change of life baby".

Although I did enjoy this audio book, at times I felt the essays just seemed too scattered, not following in particular order, and sometimes like a stand-up comedy act where random thoughts might come to mind.  Despite this, I would still recommend this audio book to anyone who needs a good laugh. Fans of David Sedaris, will likely enjoy this book. - Recommended
Posted by (Diane) Bibliophile By the Sea at 9:56 PM