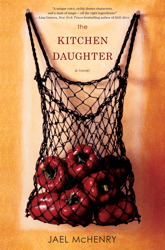 Title: The Kitchen Daughter
Author: Jael McHenry
Publication Year: 2011
Publisher: Gallery
Edition: Hardcover
Source: personal copy
Date Completed: 7/7/2011
Setting:
Rating: 4.5/5
Recommend: yes
Ginny Selvaggio is 26 years old and socially awkward,.  It's not her fault and seems beyond her control though, since she has Aspergers.  She has been sheltered and protected by her parents as a result.
The story begins with the funeral of Ginny and Amanda's parents who died in an automobile accident. At the funeral, Ginny shows no emotion, and after the funeral she deals with her loss through cooking. Using hand written recipes (featured at the beginning of each chapter), from those who have passed away, Ginny not only creates some wonderful dishes, but she is able to bring the spirit and words of her Nonna, and others to the present.  This process helps Ginny to move forward with what has happened, and soon Ginny realizes that "normal" means different things for different people.

The struggles and challenges Ginny faced were realistic of a woman her age with Aspergers, as I happen to know a young woman her age who loves to cook and behaves much the way Ginny did in this novel.  The author did a terrific job in this respect. She created a sympathetic character in Ginny, that most will cheer for, rather than pity.  A terrific debut novel.

Posted by (Diane) Bibliophile By the Sea at 7:51 AM